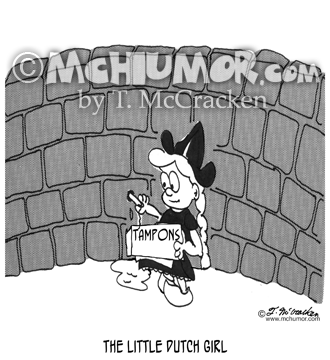 I’ve often thought there should be an Indiana Jane screenplay were the heroine saves the day by stuffing a tampon in a leaking dam.

I got the idea while living in an old trailer where the only running water was rain leaking through the roof.

One night I saw a mouse scurrying out of the bathroom with a tampon in it’s mouth. “Wait,” I shouted. “Aren’t you worried about toxic shock syndrome?”

The rest of the jumbo-box’s of extra-absorbent tampons were sopping up water in the bathroom and their mass was such that I could barely squeeze into the room.

The most bizarre tampon story I have took place in 1985 in Africa on a boat on the Zaire River (now the Congo). To travel anywhere inside Zaire at that time you had to go through internal immigration before boarding any form of transport and after disembarking. This gave dozens of people, some who appeared to have just walked off the street, the chance to go through your belongings requesting small tokens as they spotted them. “Oh, a mosquito coil? May I have it?” “Oh, a pen. May I have it?” “Oh, a T-shirt. May I have it?”

Since most officials rarely got paid on time, if at all, bribery was one way they made do, so it didn’t really bother me.

An officer for an “Anti-fraud unit” who searched my backpack was particularly perplexed when he looked through large compartment in my backpack that held a year’s supply of tampons. There are certain niceties of the western world that one does not want to do without.

“They’re for women. Men don’t need them,” I said. “How about a mosquito coil?”

When he searched my daypack he came upon my emergency supply of tampons. You never know when and where the need will strike.

“So many,” he said. “Are you selling them? What exactly are they for?”

I was beginning to worry that he wanted me to demonstrate their use when Tom, an Australian, came in.

“Here, I’ll show you what they’re for, Mate,” he said. He used the officer’s stapler to staple several onto his hat so that they hung from their strings down around his face.

“It’s an old Australian technique for keeping away flies,” he said shaking his head.

“I’ll take some,” the officer said grabbing a fistful.