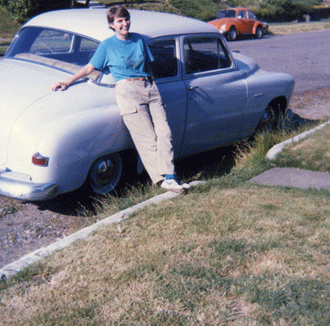 This is an article I wrote for Classic Car Magazine in 1990 interspersed with lots of my cartoons about driving.

Getting Sixteen Miles per Rolaid in a 1951 Plymouth

When my great aunt in Tacoma first handed her 1951 Plymouth, The Grey Ghost, over to me, she barely let me drive it around the block. The suggestion that I practice on side streets early on a Sunday morning sent her into hysterics, disconcerting, since I planned to take the car home. Home was 3,000 miles away in Washington, D.C.

I showed my aunt and grandparents an article about a fellow with only one leg who’d  bicycled across the United States in a little over two weeks. Surely I could do the same route in a slightly handicapped car. They weren’t calmed and didn’t even trust me to go from their house to the highway. Refusing to simply me a map Grandpa had me follow behind his car as he guided me to the freeway. It was quite a procession. Grandpa in front, I in the middle, and auntie driving behind in her new 1979 Plymouth with my grandmother sitting next to her sniffling loud enough for me to hear her.

Grandpa went at a snail’s pace. He’d get to a light just as it was changing. He’d make it through, but I wouldn’t. Auntie, trying not to lose me, would pull her car up to my bumper. When it happened on a hill I needed room to roll back an inch to get the Gray Ghost in first gear and I’d end up stalling and popping a Rolaids in my mouth.

My grandmother would break into a tears. In her eyes I was obviously a hopeless drive and  would never master the three-on-a-tree stick shift. “Oh, she won’t make it,” she wailed. “Last time she crossed the country in that car she didn’t make it!” The last time I’d crossed the country in the car was in 1964 and I was seven years old. We’d gone a very circuitous route 8,000 from Tacoma to Manhattan. We didn’t have a problem until the Holland Tunnel in New York when the car got stuck in second gear.

Everyone I knew thought the idea of driving that buggy through the Rockies and on across the country was folly, everyone but my friend Susan. We had hitchhiked up half the continent of Africa together. After that, how hard could it be to drive a 40-year-old car across America? Plus, she said when volunteering to come with me, “The Grey Ghost is about the only family heirloom you’re going to get and I think it exceeds post office package dimensions. We have to get it back east.”

Susan crammed her backpack in the trunk in between a case of anti-freeze, six gallons of water, two cases of oil, a spare fuel pump, a spare water pump, some spare belts, a couple of oil filters, and a few other miscellaneous auto parts. “Wouldn’t it be easier to just put a VW Bug in there?” she asked.

Soon after Susan and I set out I understood what people meant by an engine that purrs. The only noise we could hear was made by passing vehicles. It seemed as though we were the only ones obeying the speed limit. A passing garbage truck lost part of its load, a used disposable diaper. It landed on my windshield.

When I pulled over to a rest area to clean up the mess a leering man walked by several times. It wasn’t me he was salivating over, though, but the car. “Let me guess, a 1951 Plymouth,” he said. “I had one just like it. Lost my virginity in it.” I was driving a car I could have conceivably been conceived in.

I turned on the windshield wipers to brush off a leaf almost as soon as we got were on the road again. The leaf turned out to be a slug. Northwest slugs are so large that running into one can do as much damage as running into a deer. The slug broke the spring in my wiper and a spare wiper was one of the parts I hadn’t stocked up on.

We went through Willamette National Forest and up the Cascades. The car was performing beautifully, or so we thought. It went up most of the 4,817 feet through Santiam Pass without sounding strained at all. This is the car’s biggest problem. It doesn’t tell you when it’s overworking. About 100 feet from the top of the pass it made a God-awful noise. I thought the engine had fallen out. The heat gauge’s needle was off the dial. Instantly I pulled over, turned the ignition off and shrieked, “Do you think it’s going to blow up?” We opened the hood. Green water spluttered from the top and bottom of the radiator. I munched on some Rolaids, moaning, “I’ve killed my car, I’ve killed my car.” Susan, with little conviction, tried to reassure me that it would be fine if we let it cool down. “How long can it take?”

Next: Going over the Rockies

Driving Cartoons for magazines, brochures, ads, web site, books, etc. So cheap you can use them to sop up oil dripping from your car.