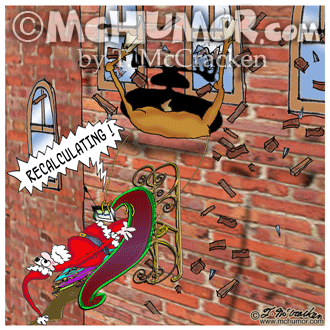 Every day for the past three weeks I’ve been posting one of my year-end letters. Alas, I didn’t write a year-end letter in 2011 and 2012 because as I recall the most exciting thing I did in those years was to sort through my empty yogurt tubs and getting rid of the ones without matching lids.

So what to put in today’s blog? Well, I did send out Christmas cards those years, so I might as well post those cartoons.

And then to round it out, I’m posting another eight of my favorite Christmas cartoons.
Merry, Merry.

Santa Cartoon 8699: Santa’s reindeer have smashed through a building’s wall while his GPS says, “Recalculating!”

Lighthouse Cartoon 8315V: A lighthouse has Christmas lights wrapped around it. “May there be light in your life.”

Santa Cartoon 8696: A whale blow goes high enough that it knocks Santa out of his sleigh. “Have A Whale Of A Christmas.”

Christmas Cartoon 4594: “Rudolph, with his nose so bright, goes in for his drug test.” A reindeer with a cup stands in a bathroom.

Christmas Cartoon 7718: Rudolph the Red nosed Reindeer driving a taxi explaining, “I was considered a part-time employee since I only worked one night a year and thus wasn’t eligible for the pension plan, so here I am in my golden years.”

Africa Cartoon 8575: “May Your Kingdom Be Peaceable.” A lion, zebra, rhino, giraffe, crocodile, wildebeest, hippo and flamingo have ornaments with a peace symbol.

Poker Cartoon 6785: Reindeer playing poker. “What were those reindeer games that the other reindeer wouldn’t let poor Rudolph join in?”

Christmas Cartoon 7829: Rudolph the Red Nosed Reindeer sitting in the sleigh sipping a glass of wine while Santa pulling the sleigh while riding a bike with training wheels. “Under New Management.”

More Christmas, Santa Claus & Reindeer Cartoons for use on cards, advertisements, brochures, etc. So cheap you can use them to wrap gifts in.