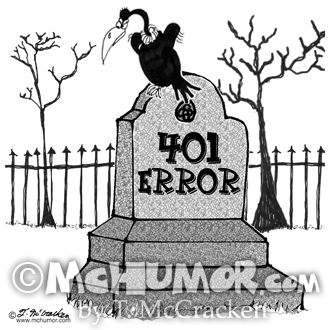 My Site is Lost in Cyberspace

When I was in high school in the early 1970s we learned how to use a slide ruler and, no joke, went on a field trip to see a computer.

About thirty years later, sometime in early 2000, I uploaded my first web pages to www.pioneer.net/~mchumor. The name just rolls of the tongue, doesn’t it? It was free web space my Internet-provider, pioneer.net, provided.

The cartoons I uploaded to my awkwardly named site weren’t the first ones of mine to appear on the web. In 1991 someone from Quantum Computer Services called to say they wanted to publish my cartoons on something they thought was going to really catch on soon with the general public, something called the Internet.

On May 14, 1991 I received the first of many royalty checks from Quantum. The checks continued even after they changed their name to America Online. I was one of the first cartoonists to have work appear regularly on the web.

Another reason I didn’t view my site going live in 2000 as a momentous event was because for a long time it didn’t change the way I did business. I continued selling cartoons the way I had for the previous twenty years: snail-mailing (although then it was simply called mailing) batches of cartoons to editors with an enclosed self addressed stamped envelope. In queries to editors I told them they could see more of my work on my site.

At some point–I can’t remember exactly what point–I had enough editors coming to the site querying me and asking me to draw cartoons for them, that I stopped sending out queries.

Over the years many other sites put links to my site on their sites, something called backlinking. Some sites pay to get backlinks. I never did. I never even asked people to put backlinks on their sites. They just did it because they liked my cartoons.

My site was considered such a high quality site that I frequently was offered up to $150 to put one backlink for a year on one of the 2,500 pages on it, more if I’d put the link on my homepage. Today Google penalizes sites that pay for backlinks because backlinks are one of the, if not the, best things you can have to get high marks from Google.

It appears that I may have lost the value of these backlinks when Watermelon Web Works redesigned my website and it went live in February 2014.

In April 2014 Watermelon hired two outside consultants to figure out why this was so.

On April 15, Paul Clerc, Watermelon’s top web guru, sent me a lengthy email about the consultant’s findings and things Watermelon was doing to bring the numbers back up.

He said, among other things: “We implemented a large number of redirects based on a naming convention. For example, science_cartoons.html on the old site would be converted to science-cartoons on the new site. … It will help improve the “backlink equity” for the site so that Google regards the site as a higher quality site and will give “credit” for every backlink.”

I can tell some of you have eyes beginning to glaze over, but try and stay with me, as this is not a trivial matter.

Google prefers website addresses with dashes ( – ) to ones with underscores ( _ ). All the web pages Watermelon designed used dashes. All the 2,500 plus pages on my old site used underscores.

I can’t remember why I used underscores in my site’s addresses when I started it. Maybe it was the norm. It certainly wasn’t an issue. At the time Google was less than two years old and not yet the all-powerful cyber-God everyone was trying to appease.

Can you imagine the penalty Google would give a site today with a tilde in its address?

I’m assuming when Paul says they “implemented a large number of redirects” they used what’s called a 301 Redirect. A 301 Redirect is akin to giving the post office a snail-mail forwarding address when you move.

With no 301 Redirects people who clicked on links to the old version of my site (whether they clicked on a backlink, or they copied and pasted a link they’d used before, or they used a link in their browser cache) they were sent to my 404 Redirect page, a page that said, “Can’t find that page, sorry… ”

Paul once told me that people usually left a site if they couldn’t find what they wanted in two or three clicks, so, as I said earlier, this was not a trivial matter.

Had I realized Watermelon wasn’t going to do 301 Redirects from the start, I would have” implemented” the redirects myself, a project that manually would have taken me less than a week to do using a WordPress plugin appropriately called, 301 Redirects.

I emailed Paul: “I hesitate to ask, how much did the consultants cost?”

He replied: “If this doesn’t work, we are not planning on charging you for the consultant fees at all, so we can talk about that once you are in the black again.”

Good news/bad news: I was never charged for the consultants’ fees because I was never in the black again.

Next: A Wrecking Ball Hits My Site

Computer Cartoons for use in presentations, websites, etc. So cheap you can afford them even if you’ve paid your web designer way too much.

For The Techies And/Or Insominacs Out There:

Paul’s complete email about the outside consultants’ “audit” of my site and
Watermelon’s redirects.

An update on the Google penalty. As I mentioned in the below exchange, we
hired an external consultant (two separate ones, actually) to assess the problems
with McHumor.com.

What they found is not conclusive, because Google’s algorithms for ranking
websites for given key phrases is proprietary. However, our experience combined
with the opinions of the external consultants has led us to believe that the
following are the problems that have contributed to this penalty:

1. Overlap of tags and categories. There are several tags and categories that are
either overlapping or identical. To put it generally, Google interprets this as
“duplicate content”. To remedy this issue, we have added a “noindex” tag to
these pages. This means that Google will acknowledge the tag pages and they
will be searchable on the site, but that they will deprioritize them for indexing, and
most likely the pages with tags will be delisted.

2. Ratio of pages with “thin content” to other pages in the site. This was pointed
out by one of the consultants. His observation was that the product pages (such
as https://thekomic.com/cartoon/7458-pirate-cartoon/) have only a sentence or
two of unique content each. These pages comprise a disproportionate number of
the total pages on the site, and he thinks that Google’s “Panda” algorithm is
interpreting the site as “low quality” because of this. We have also “noindex’ed”
these pages.

3. Naming changes. We implemented a large number of redirects based on a
naming convention. For example, science_cartoons.html on the old site would be
converted to science-cartoons on the new site. In the past couple of days, we
have gone into more depth and fixed more obscure links so that links outside of
this naming convention are also redirected to their new equivalents. This will not
directly affect search engine listings, but it will help improve the “backlink equity”
for the site so that Google regards the site as a higher quality site and will give
“credit” for every backlink.

So. These changes have all been implemented over the last few days. Google
needs to reindex the site and re-apply the algorithms to it. We have been
extremely thorough, and we are hopeful that these changes will cause Google to
remove the penalty that we believe is being applied to the site. Of course the
vexing thing about all of this is that it is impossible to know whether a penalty is
truly being applied or that our changes will get it removed, but we have good
reasons for confidence on both of these items. Paul McNamara (the consultant
who recommended the product page changes) tells me to expect the algorithm to
take 4 weeks to reassess and reinterpret the site.

We recognize that this is a very frustrating process for you. I assure you that we
are doing everything possible to understand what is happening with your site and
to address the problems in the most complete and efficient way possible. If you
have any questions, we are at your service.