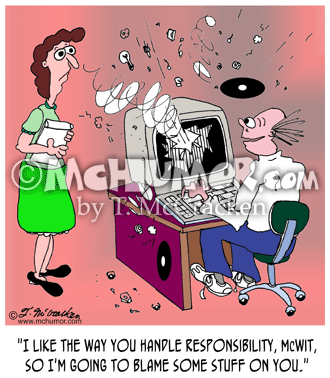 On June 8, 2014, I sold two cartoons from my site for a total of $40. The transaction went smoothly: the customer was charged the correct amount and was able to instantly download the cartoons as soon as he paid for them. The cyber Gods were with me that day.

On June 11 I sold one cartoon for $15, and the customer was able to instantly download the cartoon. At least that part of the transaction went as it was supposed to.

Perhaps the cyber Gods were distracted mid-transaction by a new cat video being uploaded.

Even though the site had netted less than $170 since February, I ate the loss. I didn’t inform the customer of the error because he had done nothing wrong.

I did inform Watermelon Web Works, the company who had redesigned my website. This had been an ongoing problem. One day customers would be charged the proper amount, the next day they wouldn’t.

I could live with a customer being undercharged. Having her overcharged was another matter. Whenever I catch a mistake made in my favor, I rectify it. I may be poor, but I’m honest. Besides, a sure way to get a bad Yelp review is to charge someone $50 when she only owes $15.

The line from it that stung was: “We have fixed all of these missing attributes at this stage, but it is a very time consuming process, so please help us to help you by not changing those.”

When this glitch had happened before, Watermelon claimed I had caused the problem by editing something called attributes on cartoon product pages. I told them I hadn’t edited attributes, that I barely understood attributes.

Now they again said I had caused the problem by editing attributes on cartoon product pages, and I again told them I hadn’t edited attributes, that I barely understood attributes.

OMG, I was living in my own version of the movie, Groundhog Day.

On October 29 I figured out that a programming error caused the price glitches, something I write about in Part 16 of this review, but that’s jumping ahead in the story.

One customer was unable to download the cartoon, so I emailed it to him.

This was the third time someone had been unable to download a cartoon since the new site went live, and I’d only sold 35 cartoons. One of the main reasons I’d had the website redesigned was so that customers could instantly download cartoons after they paid for them instead of waiting for me to email them a jpg.

In June the site was visited under 100 times, grossed $132.50, and I had no new cartoons commissioned nor queries about commissions. Since I pay about $137 a month in fees to keep the site up and running, the site lost $4.50.

By this time I had paid Watermelon a little over $7,800–77% more than their initial estimate of $4,420. Since the site went live in February it had netted $159.89. The only month that showed a profit was March, and that’s probably because there were still vestiges of my old site somewhere in cyberspace.

To pay the bills, I’ve been leading nature hikes all week and apparently my site has also been absent. According to Google Analytics I had ZERO visitors on Saturday, Monday, Wednesday and Friday and a whopping ONE on Sunday, Tuesday and Thursday (i.e. THREE visitors all week). Any chance of getting a refund?

Next: In Google’s Crosshairs

Computer Cartoons for use in text books, advertisements, etc. So cheap you can afford them even if you’ve paid your web designer way too much.

Uncut emails between Watermelon and me about the price glitches. They are unedited. I even left in my own typos.

The good news: almost 25% of the people who visited my site this July [sic] have made a purchase.

The bad news: of the 34 sessions this month, 25 were from me, visits I made while working on reducing the duplicate content of the site. I’m hoping to have that all done in a week. Most of the cartoons now only have one category assigned to them.

The good news: Today I made my second sale this month.

The sale was for cartoon

The buyer selected the multiple presentation option which should cost $30.

Good news for him/bad news for me: no matter what variation he picked, whether it was the $7.50 teacher option or the $75 magazine option, he would only charged $15.

I then randomly selected another cartoon,

This time all the options charged $50

I randomly selected another cartoon

More bad news: when you click on “Continue shopping,” instead of taking you back to the page you were on, it takes you to http://mchumor/major-topics/

Even worse news: “major-topics” is not a public page. Since it had duplicate content to the home page, it’s no longer public.

What’s happening on the cart front?

I haven’t heard anything back.

Sorry. I know I must seem like the client from hell and you probably groan at seeing an email from me when you open your mail box.

I’m really an easy going person and I trust me, my stomach is in knots every time I contact you about something that’s going wrong with the site, but I’m getting pretty desperate in that I’ve only grossed $55 this month. A year ago I was grossing at least triple that a day.

These problems with the wrong price being assigned are a result of the product variations being changed or deleted from a taxonomy page. It is super important to never change or delete product variations manually. There were 270 products that had empty attributes for a $35 variant and a $50 because the previous variant had been changed or deleted on a taxonomy page. We have fixed all of these missing attributes at this stage, but it is a very time consuming process, so please help us to help you by not changing those.

“Continue shopping” has been updated. This is something that was working, but was the page was disabled in the WordPress admin and then it no longer worked.

As far as changing the attribute values, that is a large job. We are going to need to change the existing attributes instead of using an entirely new set. So we will need to schedule that, for say the end of this month.

As far as traffic to your site, you can see that your site is now coming up on page one or two for searches like “science cartoons” and “animal cartoons” and that the search traffic on webmaster tools is increasing, so that is a good sign that reducing the category to product ratio is working. No need to have everything be in just one category (though it doesn’t hurt), but no more than 3 per product is a good guideline.

Blog posts that pertain to your categories will also help.

I added variations before the site went online, but haven’t done anything since … or at any rate, I don’t think I did. One of the problems I have with the site is that I’m not entirely sure how it all works. Pretty much all I’ve been doing, or thought I’ve been doing, is modifying categories and tags and uploading a few cartoons. I try not to mess with the other stuff both because I don’t understand it and because I’m terrified that I’m going to really screw the site up.

At some point, though, once the site is up and running profitably, I hope you all can walk me through how to make changes so I won’t have to go through you ever time I want to tweak something.

For instance, in addition to Google Analytics, I’d like to have my old Stat Counter on the site. I prefer the way it shows the query the visitor used to get to the site and then the paths they took once on the site. Adding the code to the template on my old site would take me a couple of minutes.  Now, though, I don’t dare touch the template and, asking you to add it will cost me money I don’t have.

When we first talked a year ago I asked if I’d have difficulty running and updating the site once you handed it over to me, and you said yes [sic].

I’ll get to the blog after I finish the re-categorization. I’m dyslexic so writing is very difficult for me. It takes me almost a day to put together a couple of paragraphs.