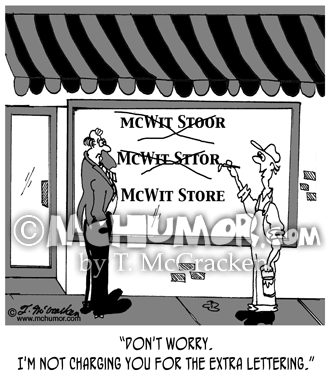 A typo in the computer code on my site, an “s” where an “s” shouldn’t have been, may have lost me thousands of dollars.

On December 1, 2014, a customer emailed that he clicked on a link that sent him not to the product page he was looking for but a 404 Redirect Page that said: “Can’t find that page, sorry…”

The page he was looking for sold one-year licenses for the use of an unlimited number of McHumor cartoons.

This explained why I’d sold only one such license between February and August. Watermelon Web Works redesigned my site and it went live in February. The site was a disaster, and so in August I uploaded my old site. I now have links from the old unimproved site to Watermelon’s version.

The typo, an extra “s” on a URL address, was something I could have fixed in minutes if it had been on the old part of my site, a 2,500-page site I designed using Dreamweaver.

The site Watermelon designed is a WordPress site. The typo could have been fixed in minutes there too if I knew which template or php held the bad code. God forbid there should be a template called Product Page Template. That would have been too easy.

Watermelon says on their own site: “Gone are the days of emailing your web developer to update your website. Today’s website is powerful, elegant and eeeeeeasy to drive.”

I repeatedly asked if someone at Watermelon would guide me through the mechanics of the site. They could have charged me their $85-an-hour fee. No one, however, responded to these requests.

I emailed Watermelon about the typo and said:

I would make the edit myself, but I have no idea where to do so.

Even without needing this correction, I would like to know where to edit this …

I am hoping you will not charge me to tell me where to make the edit or to make this correction yourselves since:
A) It was a web design error/typo
B) I have probably missed out on sales for the last 8 months due to this error.
C) On your FAQ page you say, “We generally develop websites so that just about every feature can be updated by our clients.”

On December 4 I received an invoice from Watermelon for $297.50. I emailed their billing guru: “I hate to be a pain, but the items I’m being billed for are from November 2013, not last month. There shouldn’t be anything from last month.”

She replied: “That was an error on our part. I deleted the invoice. Sorry for any confusion this may have caused!”

On December 8 Paul Clerc, Watermelon’s top web guru, finally replied to my email: “This has been updated for you. I am making this adjustment free of charge for you, but further adjustments to your site that require our intervention will need to be billed at our normal rate.”

Not surprisingly, he didn’t tell me where I could have made the edit on my own. I have since figured out the typo was in something called “Theme Functions”. If I’d known that at the time, it would have taken me no more than two minutes to fix.

I’d ask: “Dr. Clerc, would you kindly remove a sponge you left in me?”

He’d reply: “I’ll do it free of charge this time, but if you find any more of my sponges in you, I’ll not only have to charge you my normal fee to remove them, I’ll have to charge you a user fee for walking around with them for the last eight months.”

On December 19, eleven days later, I sold a license for $500 via the fixed link.

Next: One Last Glitch

***
At one point Paul said the way to save my website was to blog. Another of Watermelon’s web gurus once wrote me, “Blogs are considered highly sharable, so write great blog posts for people to share!”

Computer Cartoons for use in magazines, websites, etc. So cheap you can afford them even if you’ve paid your web designer way too much.