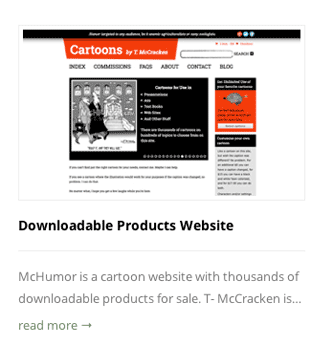 On February 4, 2015 I made this screen shot from Watermelon Web Works’ portfolio page where they showcased some of the sites they have designed, including mine. Not surprisingly, at some point in the last couple of weeks they stopped showcasing it. It’s one backlink I don’t mind losing.

On February 5 I emailed Watermelon: “I’m ready to have the site migrated over to GoDaddy and get out of your hair for good. … Should I have GoDaddy do the migration? Thanks.” In addition to web design, Watermelon hosts websites. I paid $19.95 per month for these services and never had a problem with them. However, I didn’t need them because long ago I signed a multi-year contract with GoDaddy to host my domain, The Komic.

It was a project I had hoped to work on once mcumor.com was running smoothly. Alas, I spent so much of  last year putting out  fires on mchumor.com that The Komic went not just to the back burner, but went off the stove entirely.

Watermelon knew about my GoDaddy slot and on August 26, 2014, graciously said if I liked they would schedule a migration of my site to GoDaddy. I said to hold off. Mchumor.com was just beginning to recover in late August and I didn’t want to risk something else going wrong right then.

On February 9, Paul Clerc, Watermelon’s top web guru, replied to my email about migrating my site: “This may take a few weeks for us to get on our production schedule. If you need it done right away, yes, please ask GoDaddy if they can help. Thanks.”

I needed it done right away because I had planned to send Paul a copy of this series the next day, February 10, saying: “I will publish any comments you would like to make in their entirety and unedited.”

I paid GoDaddy $99.99 to do the migration. On February 16 GoDaddy told me that they couldn’t migrate the site because it had too many files. This was awkward. My review of Watermelon was set to begin the next day, February 17, the one-year anniversary of my redesigned site going live. Now I had to ask Watermelon for help. I emailed:

I just can’t catch a break. GoDaddy tried to migrate the site, but said it has 315,855 files. Their limit is 250,000 files. They think that many of these files are backups, but they didn’t want to risk deleting anything, so said it was best if you did the migration. If they are correct and the site is a lot less than 250,000 files without the backups, please put it on your production schedule. If it is near the limit, I’ll stay put as I’m always loading new cartoons.

On February 18 Watermelon replied: “Backups have been deleted from your site, mchumor.com – the total number of files should now be reduced to an acceptable number.”

Originally I had planned to discuss in this part of the review the irony of Watermelon’s showcasing my site on their own site, but I changed my mind after reading the above email. Instead I decided to write about how graciously they handled the migration to GoDaddy.

I was so busy for a few days that I didn’t have the time to do a complete review of the migrated site. On February 27 I emailed Watermelon:

My bad luck continues. Is that what they mean by the “Luck of the Irish”? Things did not go well with GoDaddy’s migration of the WordPress part of the website this week. The checkout button is missing from product pages, as is the cart page, the certificate that allows secure checkout, and many images. So, I’m sticking with Watermelon Hosting … assuming you still have the site somewhere. Thanks. Mirthfully yours, T- humble cartoonist

Hello Theresa, We do have a fully intact version of your site on our server. While we are glad to supply you with a backup of the site that can be restored on any cPanel-compatible server, we decline to conduct any further business with you at this time. If you would like a copy of your site, please let us know and we will make that available for you. Best regards, Watermelon Projects Team

The warm fuzzies were nice while they lasted.

In 2014 I purchased from Watermelon an SSL Certificate, an electronic key that keeps data such as credit card numbers secure. It is good until 2016. I’m sure there was a way to have it transferred over to the GoDaddy site, but I didn’t bother asking Watermelon for help. Instead I just bought another certificate from GoDaddy.

The missing images had been contained in a folder of “Uploads” from September 2013. There were over 12,000 images in it. I suspect that was too many files for one folder, and so they floated off into cyberspace. These were my cartoons, my babies. I hope they’re not cold, lonely or scared out there.

The missing shopping-cart button was something of a mystery. Somehow three lines of code went missing from something called, “Theme Functions”.

Apparently Watermelon’s Project Team did not inform its billing gurus that they were not doing any further business with me because on March 4 I was sent an invoice for their hosting services.

The original title for Part 18 was not One Last Glitch, but One Last Laugh. That’s because on Watermelon’s Portfolio page they said of my site:

McHumor is a cartoon website with thousands of downloadable products for sale. T- McCracken is a cartoonist in Oregon who has illustrated on a wide variety of categories, and needed an easy way to add new cartoons to her website and manage orders. We designed and setup a WordPress site with a custom ecommerce solution so that her digital products could be offered at variable prices depending upon use, and protected from unauthorized downloads. Thousands of cartoons were imported into the shop using our techniques, saving days of manual time.

If you’ve read the previous seventeen blog posts, you’ll understand why this is funny.

When they said: “We designed and setup a WordPress site with a custom ecommerce solution so that her digital products could be offered at variable prices depending upon use, and protected from unauthorized downloads,” you should know what was really variable was whether customers would be charged the correct amount. One day they would be, the next day they wouldn’t.

When they said: “Thousands of cartoons were imported into the shop using our techniques, saving days of manual time,” you should know I’ve now spent months, not days, manually cleaning things up.

At least they got this part correct: “McHumor is a cartoon website with thousands of downloadable products for sale. T- McCracken is a cartoonist in Oregon who has illustrated on a wide variety of categories, and needed an easy way to add new cartoons to her website and manage orders.”

Computer Cartoons for use in newsletters, self-published books, etc. So cheap you can afford them even if you’ve paid your web designer way too much.