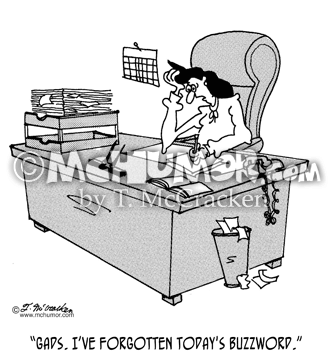 How to Become a Slightly Warped Cartoonist: Part 4

This is another in my series of posts trying to answer the second most frequent question I’m asked as a cartoonist: how do you come up with your ideas?

Everyday I make a list of buzz-words, fads, and news items I hear or read about. Here’s one of my lists and the thoughts I had when I went through it to come up “Aha” moments that I turned into cartoon gags.

Feng Shui? Feng shui. My studio is a mess. The feng shui must be off. That might be why I’m suffering from writer’s block. Skip this one for now.

I wonder how I’d do in prison? I’d miss my messy studio. I bet white collar criminals can afford interior designers who’ll make sure their offices’ feng shui is proper. Aha!

Water, water, everywhere. Jack and Jill went up the hill to fetch a pail of water. Why go up hill? That’s a lot of work. Is there something wrong with the water at the bottom of the hill?

I don’t have one. In Waldport, Oregon a single woman over thirty has a better chance of being abducted by space aliens than of finding a compatible man. Oh well. I may not have a man, but I do have an awesome computer.

I often do dozens of variations of the same idea, tweaking it, and essentially reselling the same cartoon over and over. I never sell the same idea to competing magazines, though! That is a major cartooning faux pas.

For example, I made a template of the “Significant Other” cartoon so I could whip out a variation in minutes. I switched the biker to an audio tech holding a mixing board and sold the ‘toon to a sound engineering magazine.

Another change and I sold it to a surfing web site.

I even did a variation for a book about writing pre-nuptial agreements.

In tomorrow’s post I’ll show how I came up with cartoon ideas for terms 6 through 10 using antonyms (opposite definitions) and carrying ideas to extreme and absurd conclusions.