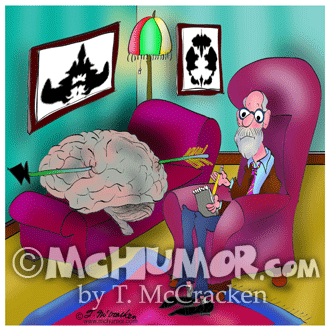 How to Become a Slightly Warped Cartoonist: Part 2

Frankly, I don’t know. For the most part my cartoon gags spring whole cloth—or whole cartoon – out of the cosmos and into my head.

Al Capp, creator of Li’l Abner said that being dropped on your head as a small child gave you a leg up if you wanted to be a cartoonist. I fell on my head as a tot not once, but twice. What luck! Maybe my brain damage is what opened my flood-gates of humor. I have humorous and absurd thoughts flowing through my slightly-cracked skull pretty much non-stop. This is a real problem at funerals.

The doctor who gave me my first colonoscopy said he’d never laughed so hard as he did during my exam. Maybe next time he’s examining me we could go as a duo on open mike night at a comedy club.

One of the things I love about cartoons is that anything can happen in a cartoon.

Animals and even single celled creatures have rational thoughts — sort of.

People have irrational thoughts about amoebas.

Fairy Tale characters struggle not with dragons, but with bureaucrats.

And history is written not by the winners, but those with wit.

So can someone who’s never had the good fortune of being whacked on the head come up with great cartoon ideas?

I always carry a notebook to jot down ideas, so for awhile I not only wrote down the ideas, but what was happening and what I was thinking about when the ideas came to me. Truthfully, most ideas came out of nowhere.

Some though, were prompted by external influences and that’s what I’m going to write about in my next series of posts.