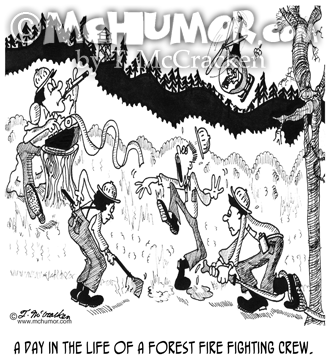 Fire season is upon us and that got me thinking about my days as a forest fire fighter.

It was one of my “other duties as assigned” when I was Siuslaw National Forest’s head naturalist at Cape Perpetua. These are excerpts from a journal I kept over the years. They first appeared in Backpacker Magazine.

“Concerned crew boss: ‘If you get hurt, be sure to tell me immediately so I can start the paperwork.’”

“A helicopter accidentally dropped 750 gallons of fire retardant on our crew today. It’s a badge of honor to appear in camp wearing Jellolike slime.”

“Sign at camp flight headquarters: ‘Only bird droppings and fools fall from the sky.’”

“The fire quadrupled in size last night burning more than 140,000 acres and the fire camp. It rolled over 120 fire fighters who had to deploy fire shelters (otherwise known as “shake-and-bake-bags”) as my crew wandered around in the dark lost and unable to locate the fire because we’d mislaid our map.”

“Newspapers reported that fire fighters were jubilant over the 18 inches of snow that had slowed the pace of the blaze. We weren’t. We had no tents.”

“Fire fighters earn an average of $10 an hour. Contractors doing the laundry are paid $2 per article of clothing—that comes to $6 for a pair of socks and underwear.”

“With a 20-to-one male to female ratio, fire camp is one of the few places where men stand in line for the bathrooms longer than women.”

“On the fire line women have a hard time finding unburned bushes to hide behind while they go search for ‘Smokey the Bear.’”

“The medical unit ran out of throat lozenges but had plenty of condoms.”

“I finally made my fire fighting experiences complete. I tried chewing tobacco. It wasn’t as foul as I thought it might be, tasting like tangy prunes—and having the same effect.”

On a more somber note, lift a beer to the thirty-four fire fighters who died in the summer of 1994, including fourteen  Oregon Prineville Hotshot forest fire fighters who died in Colorado on Storm King Mountain. I worked with many of them. Fortunately for me and my family I spent much of that summer at a fire in Washington State’s Wenatchee National Forest. Lots of houses were lost, but no lives.