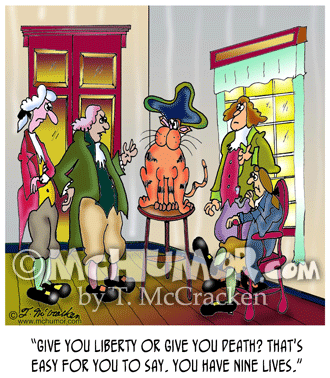 How to Become a Slightly Warped Cartoonist: Part 6

I draw very few cartoons about things that happen to me. In fact, if you want to drive me nuts, whenever something funny happens say, “I bet you’ll draw about this,”

Most funny things that happen to you are funny only in context. Have you ever tried to describe an incident where at the time it happened everyone involved was laughing hysterically, but the people you’re telling the anecdote to look confused, not amused. That’s what I call an ”I guess you had to be there” moment.

A cartoonist has only two seconds to get her point across. Two seconds! Outside of doctors obeying the two-second-rule in picking up a heart that’s fallen on the operating-room-floor, there’s hardly anyone else who has so little time to succeed in.

That’s why I have lots of history cartoons. Readers already know something about the characters and their lives. You don’t have to waste precious nano-seconds filling in back-story details.

Cartoons of historic figures often have them dealing with modern problems or dealing with old events in a modern way, a clash of cultures so to speak. For example, how would George Washington admit he cut down a cherry tree if he were a politician today?

The random selection process involves Squeaky, my cat, and a deck of cards. Squeaky picks the lists I’ll work on (i.e., I work on whatever lists she’s decided not to snooze on in her valuable role as a paper weight). The items on the lists are numbered 1 through 13 so I pick cards to select where to begin free-associating.

Here are a few notes from a gag writing session using lists of historical characters.

Squeaky and the cards pick Benjamin Franklin from a list of historical characters and a car in need of repairs from a list of predicaments. Does he have a flat tire? Did someone run into him with a horse? Does he need a ring job? I don’t know exactly what a ring job is, but I understand it’s expensive. Maybe it’s nothing that serious. Maybe he just has a dead battery. Aha! What’s Franklin known for? Flying a kite in an electrical storm. Obviously there’s something wrong with our educational system when people know more historical clichés than historical facts, but I’m not complaining. It makes my job so much easier.

Squeaky and the cards pick Columbus and Isaac Newton. Now there’s an awkward blind date. In pre-politically correct days we were taught Columbus discovered America. What’s Newton known for? Being beaned by an apple. Maybe he had the potential to become a slightly warped cartoonist, but chose to waste his talents and went into science instead. What about Columbus being beaned by an apple? Apples are an introduced species to the New World. What was here before apples? Coconuts. Aha!

Squeaky and the cards pick Columbus again, but this time paired with a maternity ward. Was Columbus married? There are no historic clichés about his wife. He had to have a mother, though. What was his birth like? Was he destined for greatness from the very beginning? Aha!

Tomorrow’s post will be about creating cartoons using characters from fairy tales and horror movies.