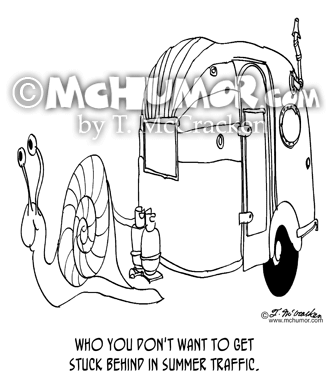 It used to be that if you needed to make room at the adult table you put grandma and grandpa on an ice floe.

Now with global warming, there aren’t that many ice floes anymore and what ones there are, are reserved for polar bears.

Instead we set grandma and grandpa adrift in humongous recreational vehicles on Highway 101, RVs the size of the USS Enterprise.

License Cartoon
Get it Printed on Stuff from CafePress and Zazzle

RVs and tourists are the bane of our summer existence here, but what are you going to do? Replace the “Welcome to Oregon” signs at the borders with, “Stay home. Just send us your money.”

It’s nice to see that more folks driving RVs are getting more environmentally conscious. Fewer of them now are towing gas-guzzling SUVs.

Now many of them are towing hybrids.

And on the back of the towed hybrids are often a couple of mountain bikes.

They all seem to be driven at 40 mph. Until, that is, they get to a passing lane. Then they go at warp speed. There’s a reason for this. They ARE the prototype for the USS Enterprise. Grandpa sits up front wearing his captain’s hat and every now and then he radios Scotty in the engine room. These behemoths are big enough that they must have engine rooms, right?

He radios Scotty in the engine room and says: “Scotty, can’t you give me more power?”

And Scotty says, “I’m trying Cap’n, but I don’ think the dilithium crystals can take it anymore.”

And grandpa says, “But, Scotty, there are twenty or thirty cars behind me, cars filled with kind and patient Oregonians. I remember how it was before I retired, trying to get to work on time so I could make a few more payments on the RV. Please, Scotty, you’ve got to give me more power. Why don’t you try calling technical support?”

Problem is that in Lincoln county cell phone service is spotty. If you see someone hunched over, chances are it’s someone who’s found one of the few sweet spots where you can get one bar.

Grandpa doesn’t know this, so when the RV crests a hill and speeds up he thinks it’s Scotty doing his magic so grandpa puts the pedal to metal. Some of the cars behind them still try to pass, but before they can, they’re stopped by a flagger.

That’s because in Lincoln County speed limits are enforced by potholes and the shortest distance between two points is always under construction.