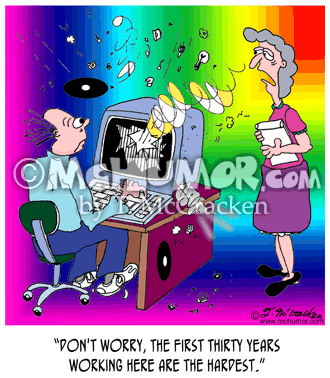 The relaunching of my web site has been in a word, disastrous.

To humans the new web design is nicer to look at than my old site and much easier to use, but Google hates it.

What happens when Google hates your site?

Nothing. Quite literally nothing in that your website doesn’t show up on web searches so nobody goes to it.

Not being able to find any sacrificial virgins on Craig’s list to offer the Google Gods, I’ve spent the last month doing tweaks that I hope will appease them.

It’s been mind-numbing work, so I haven’t been much of a conversationalist of late, nor much of a blogger.

But blog I must, say my web gurus. It’s one of the ways get back into Google’s good graces.

Apparently academia isn’t the only place where you perish if you don’t publish.

One of the more ironic bits of web analysis shows that my pages contain too little text.

Too little text?! It is a web site full of cartoons, for heaven’s sakes. Have the Google Gods not heard that a picture is worth a thousand words?

A good blog post in Google’s eyes has at least 300 words. The Gettysburg Address only had 271 words. Perhaps Lincoln was trying to up the word count by saying “Four score and seven years ago” instead of 87 years ago.