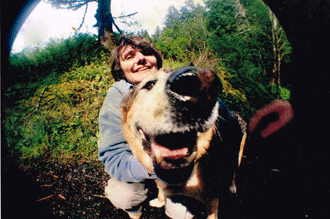 My 1996 year end letter in which I write about, among other things, my failure to inspire a bunch of delinquents who were put in my charge.

My great-aunt Irene, the one who gave me my 1951 Plymouth, died peacefully here in Waldport this year. She died soon after the only doctor in town had retired so for three weeks there wasn’t anybody to technically declare her dead and sign a death certificate. If she wasn’t dead when they put her into the refrigerator at Bateman’s Funeral Home she certainly was dead when she came out. She was 89 and had been sick for some time. A few months before her death I moved her down from Tacoma to a great adult foster-care home here so I could stop in and see her every day after work.

I returned to doing fieldwork for the Forest Service, but instead of cruising the back woods alone in a pick-up, I’m driving in a seven-person van with six Waldport Alternative High School kids in tow. It’s an experimental Oregon Youth Conservation Corps Program and we’re guinea pigs. With these twelve extra hands, it only takes me three times as long to do my work as normal.

Three days a week the kids go out with me and “help” in the field and two days a week they are in school. It’s supposed to be intensive hands on learning and is the type of program I would have loved when I was a kid. In theory my charges are supposed to learn about ecosystems by doing tree and plant surveys, geometry by doing road surveys, fish habitat by wading out in the middle of rivers counting salmon and looking for spawning areas and history by doing restoration work at Heceta House. While they’re doing this work they not only get high school credit, but they get minimum wage for the days they’re with me.

When I started with the kids I envisioned a schmaltzy Hallmark movie out come: grouchy curmudgeon turns around delinquent unmotivated kids’ lives. Alas, although I am an inspiring leader to the interns at Cape Perpetua, I’m not an inspiring leader to these kids. I can teach them ecology, math, etc, but I don’t seem to be able to teach them something more important in life: empathy. I naively thought that caring about them and being a “do as I do” sort of role model would do the trick. It always works in the movies.

The morning after my aunt died I met the kids as usual at the school, told them about her death and said, “I’m driving to Portland today to pick my mother up at the airport.” The first thing out of four of the kids’ mouths? “What about us?” When I told the kids I had taken the time to call people at the Forest Service to take over my duties for a few days not one of them said, “Thank you.” Only one kid came up to me later and said, “I’m sorry about your aunt.”

At least my pets love me. I now have what looks like a moose but is most likely a German shepherd with a huge nose. Some one dumped her in the forest near my house. She wandered in and was so big that my dog Heidi looked at her and woofed, “She’s twice my size, so don’t expect me to try and get rid of her.” The cats find her cozy to sleep on. I’ve kept her and named her Zooey.

Where as in the past I spent much of my spare time cartooning, I now spend it collaborating with a man from Oregon State University on a book about Edmund Creffield and the Holy Rollers. It has everything a best seller needs–murder, mystery, insanity, great evil characters, great angelic characters, a great setting, and sex–plus it’s all true. Creffield, a.k.a Joshua the Second, was a “prophet” in Oregon in the early 1900s. Originally he preached that Christ was going to be reborn. Creffield was to be the father, but he didn’t know who the new Mary was going to be. He and his followers held very loud services in Corvallis, so loud that they were banned from the city, especially after they were caught roiling around the floor making “wild whoopee” and they burned all the furniture in the house they were occupying, along with a cat and a dog (a baby was spared). Creffield was tarred and feathered and sent packing, but ended up marrying the daughter of a prominent man in town, a heavy odor of tar still clinging to him. Shortly thereafter he was charged with adultery, a criminal offense back then. While everyone hunted high and low for him, his followers all started going crazy and were one by one sent off to the insane asylum, which was unfortunate for poor Creffield because he was hiding beneath his father-in-law’s house and being secretly fed by his followers. A few weeks after the last of them was committed, he was found half-starved and naked under the house. They drug him out and he spent the next two years in prison. When he was released he announced the world was going to end and two days later San Francisco crumbled under an earthquake. His followers were more devoted than ever. He came here to Waldport and set up a church in a cave near the beach. Knowing men were out to kill him, he fled, but one, George Mitchell, followed Creffield’s wife, Maud, hoping she would lead him to Creffield. George was upset because his young sister, Esther, was picked as the new Mary. One morning in Seattle, in front of witnesses, George killed Creffield. There was a sensational trial and in the end George was found not guilty by reason of insanity. He was released and tried to make amends with his sister, Esther. She met him at the train station, pulled out a gun she had bought with her witness fees, and killed George. She and Maud were arrested for the crime, but before they went to trial, Maud mysteriously died of strychnine poisoning. Esther was sent to the insane asylum, and after she was released, she too committed suicide. The entire story has dozens more plot twists, more than most fictional murder mysteries do. Many of Creffield’s followers ended up around Waldport, many died of mysterious causes, and to this day, few of their descendants, my friends and neighbors, ever talk about the incident. A magazine article came out about the cult in the 1950s, and all the men in town went up and down the coast buying and burning every copy of the magazine. Half the town is eagerly waiting for our book, and the other half is edgy.

Hope all is well with you and yours. Happy Holidays.

More information about the Holy Rollers

Forestry Cartoons. So cheap even an out of work logger can afford them.