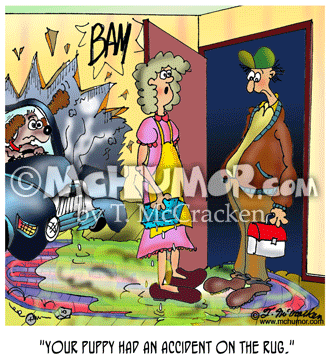 “The advantage of getting a puppy at 57 is your bladder holds about as much as a puppy’s, so house breaking is easier.”

On March 29th, my old dog Sammy died of complications due to surgery for cancer. I was pretty devastated. My parents were visiting, and Dad said he’d buy me a puppy for my upcoming birthday. Oh how I longed to hear those words when I was a child, but I told him, no thanks because I always take in older dogs no one wants.

My first dog was Heidi, a shepherd/husky mix. We got along well because we were both Omegas, as opposed Alphas. I hadn’t planned on getting a dog when I got her. I was just taking a stray to the shelter because they’d found its owner. As a woman was leading her to a cage she said to another dog, “No, Heidi. No one ever comes for you.” She’d been there for two years.” I’m a sucker. That’s OK because Heidi was my best friend for the next fourteen years.

A couple of years later I found what looked like a moose on my porch, but it was most likely a German shepherd with a huge nose. Her paws were almost raw, so I suspect someone had dumped her in the forest and she’d been wandering for days. Heidi looked at her and woofed, “She’s twice my size, so don’t expect me to try and get rid of her, and the cats found her cozy to sleep on, so I kept her and named her Zooey.

After she and Heidi died someone called to say they had Sammy, a collie/shepherd puppy at the shelter with Heidi’s sweet Omega temperament.

“Seven-years old.” Well, Sammy may have been seven years old, but she was a puppy at heart and was my best friend for the next five years.

A few years ago a neighbor had to go into assisted living, so we took in his seven-year old puppy, Misty, another collie/shepherd mix. She has food allergies, is balding in back, has a big fat cyst on her side, and is adorable.

I had Sammy cremated and arranged to pick up her ashes from the vet on the way to the train station to drop off my parents. The next series of events almost makes me believe in fate.

1)    We got out of the house five minutes earlier than planned, so missed the email that said my parent’s train would be delayed by two hours.

2)    As we pulled into the vet’s driveway, my dad again offered to buy me a puppy.

3)    There was a woman looking at the “Closed” sign on the vet’s office door who said she was an hour early for her appointment. I told her that the vet was expecting me, so should be along any minute. She asked if I had a dog. I told her I was picking up the ashes of one.

“Oh,” she said sympathetically. “Would you like another?” she asked. I said, “No thanks.”

I looked in her back seat. What an adorable sight. I asked if I could hold one.

Dad jumped out of the car, check book in hand.

Dog Cartoons, so cheap you can use them to paper train your puppy.

3 thoughts on “My Life Has Gone To The Puppies”