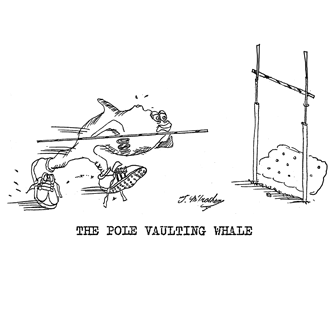 Once upon a time a whale qualified for the United States Olympics Pole Vaulting Team. The Russians objected and accused the U.S. of exploiting a dumb fish for capitalistic purposes.

The whale said in song that he wasn’t a fish, that he was a mammal, and that he wasn’t dumb. To prove the latter he sang Hamlet’s soliloquy. A judging panel of Shakespearian scholars gave him a score of 2 saying it wasn’t the worst recitation they’d ever heard, but it was flawed due to improper inflection. END_OF_DOCUMENT_TOKEN_TO_BE_REPLACED