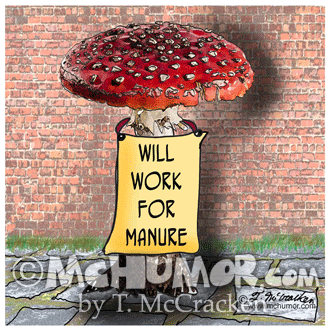 I was surprised to learn that Charles Darwin’s daughter, Henrietta, was a prude.

She did her best to rid her patch of stinkhorn mushrooms. Their Latin name, Phallus impudicus, gives an indication why a prude wouldn’t like them. Even a kid from Waldport whose Latin doesn’t extend beyond E Pluribus Unum can get a pretty good idea what this particular “fruiting body” looks like. Fruiting body is what they call the part of a mushroom you can see. Some are limp. Some are erect.

Stinkhorn is so named because it smells like–how to put this delicately?–rotting road kill. They were so odiferous that Henrietta could sniff them out. She then jabbed them with a stake and burned them.

She did this to “preserve the purity” of her female servants. What were these women? Necrophiliacs? They must have had an even worse crop of men to choose from than I do.

I wonder what Henrietta’s views were on the split gill fungus (Schizophyllum commune). It has over 28,000 different sexes! I’m a naturalist, and even I have a hard time grasping such a concept. It’d be so much easier if I lived in a red state. I’m sure this fungus isn’t allowed there, and even the mere mention of them within 100 yards of a school is illegal.

Sex Ed Cartoons and Biology Cartoons for books, magazines, blogs, etc. Cheaper than a date, and a lot more entertaining than most blind dates.

I’m an award winning naturalist, hiking guide and humorist that you can rent for a measly $120 per day on your next visit to the Oregon Coast.

A comedy routine I once did about fungus.