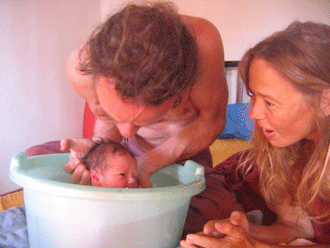 My 2006 year-end letter where I tell about a surreal trip through Norway’s fjords on a pirate ship with dueling accordions, and gross mushroom facts.

There was no topping the gift my brother gave my parents for their 50th wedding anniversary: their first and, probably only, grandchild since they refuse to count my dog as one. Under a full moon on Friday the 13th of January, Anne, my bother Peter’s wife, gave birth in Goa, India to Alex. Anne teaches yoga at the clinic where Alex was born and Peter, well; I’m not sure what Peter does. He works hard at not spending money, which seems to me to be harder than working earning money, but they all seem happy so who cares? The three of them flew to California for the December anniversary festivities. It was a low key, but delightful affair: dinner at the Biltmore. It being a special occasion and a pretty swank place–and not wanting to worry about designated drivers–we opted to take a limo with a meter instead of driving my folk’s 20-year-old Chevy Nova and my beat up pickup.

Alex is balding, leaks from various orifices and has a limited vocabulary–a description that fits most single men in Waldport, but unlike the local bachelors, I fell in love with the little guy as soon as I saw him. As this is a year-end letter, it goes without saying that he is superior to all other babies.

The anniversary wasn’t the first time I saw my nephew. PANDAA (our acronym for Peter, Anne and Alex) flew to Anne’s home in southern Norway in July to introduce Alex to her parents and cod liver oil. My parents and I also flew in. Anne’s family and Norway were fabulous. Grete, Anne’s mother, transporting all of her groceries on a bicycle, made one fabulous multi-course feast after another. She lives in a 400-year-old farmhouse and was a little embarrassed when I opted to stay in of all rooms, one that once served as a jail and still has bars on the windows. No matter. It was very comfy, and most important, was next to a toilet. If I ever have plastic surgery it will be to have my bladder enlarged. Besides, I can now claim to have spent two weeks in a Norwegian jail without ever being charged with a crime.

Jack, Anne’s father, took us out on his mock-pirate ship. After firing the cannon, throwing Champaign and Champaign glasses overboard to appease the sea gods, he pulled out a huge platter of lox for the rest of us to gorge on as he and my mother played dueling accordions while Anne, barefoot and wearing bright Indian clothes, worked the lines in-between breast feeding as we sailed through fiords. Who knew a land full of Lutherans could be so surreal?

My other little buddy, six-year old Katie, started first grade this year. She’s almost too good of a student. It didn’t take her long to figure out that her spelling lists of rhyming words were incomplete. How smart are you? What words go between duck and luck, or dart and mart?

Not much memorable has happened in my own life this year. I did get a new vacuum cleaner. My last one erupted in flames. Apparently this is what happens when you clean and two, three, four years later, you clean again. I was tidying the house because an old friend of mine, Norman, came for an extended visit. Although he’s gay and out of the closet, he likes everything else to be in the closet. The only appliance I use less frequently than a vacuum is an oven. When Norman was baking bread he discovered that a family of mice had taken up residence in mine. Judging by their food stash they had been aided and abetted by my dog and cat. Norman’s moved back to Thailand, so the appliances and local fauna are safe for another few years.

As you may remember, last year I had my stand up comedy debut. Like most aspiring comics, I was hoping for a call from Leno or Letterman. Instead I got one from The Yachats’ Mushroom Festival. Would I do a routine about–what else–mushrooms? I guess Ellen DeGeneres and Jerry Seinfeld were busy that night. In prepping for the bit, I learned a slew of fascinating, if not disgusting trivia. Did you know that not only can you get high on mushrooms, you can get high drinking urine from someone who got high on mushrooms? I want to know who that first bemushroomed person was who said, “I’m going to pee in a cup and then I’m going to drink the pee.” The active ingredients in many drugs remain potent after as many as six passes through the human body. What do they do with the urine from people who fail drug tests? Sell it on eBay? When I was reading about fungal diseases I began to think I had many of them, including “Hole-in-the-Head” disease. I didn’t need to read anything further than the name to know I suffered from it. Who cares if up until now only horses got it? I have it. An old Jewish curse is, “May doctors through out the land hear of your case.” I’m sure my case will soon be plot lines on ER, Gray’s Anatomy and House. I’m going to be the first person diagnosed with mad mushroom disease and my brain will turn into a large puffball. It’s amazing I’m still able to write as coherently as I am.

Hope none of you are suffering from hole-in-the-head disease and all is well with you and yours.

A sit-down comedy routine I did about mushrooms.