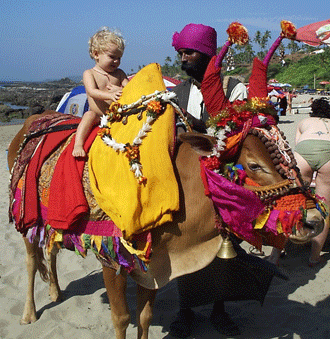 My 2008 year-end letter where I write about visiting my brother and his family in India, distracting my nephew with cows, ending up in knots in a yoga class for women who were eight-month’s pregnant, and finding the perfect gift from the Plastic’s Walla (he who sells plastic junk).

I want to start right off by saying that while it’s true I have the ability to reach across the aisle with a joy buzzer in my outstretched hand, there is no truth to the rumor that Barack Obama is considering making me secretary of a soon to be formed cabinet department, the Department of Humor & Hilarity (HAH). How these rumors get started, I don’t know, but I wanted to nip the gossip in the bud.

You may recall that I ended last year by planning a visit with my parents to India to see my brother, Peter, his wife, Anne, and most importantly, my nephew, Alex. The adventure began the instant I left my door as the Oregon coast was being battered by an honest to God hurricane. My neighbor asked if, considering the conditions I was flying in, my will was up to date. I told her that since I had planned on leaving everything to Alex, if I died in an attempt to see him I wasn’t sure he should get a cent. I had only slightly fewer stops than Marco Polo on my journey from Waldport, OR, U.S.A., to Badem, Goa, India with stops, layovers and plane changes in Eugene, Redmond, Los Angeles, Taipei, Kuala Lumpur, Mumbai and Dabolim (try saying that ten times fast when you’ve been in transit for two-and-a-half days). It was all worth it, though, when Alex, then two, crawled into my lap, pointed, grinned and said, “Aunty T-!”

His first word was “tits” so you can imagine how he felt about being weaned, something his mother was trying to do while we were there. I was often in charge of distracting him when “she with functioning mammary glands” went to work. “Look. Cows!” I’d shriek while pointing in the direction opposite to the one Anne was biking in. Sometimes this meant I’d be pointing into the kitchen, but it wasn’t entirely beyond the realm of possibility that there might be cows in there. They really are roaming everywhere in India. By the way, the safest way to cross a street in India is to walk next to a cow. Hitting an American is probably considered little more than a minor traffic violation. Hitting a cow is a major no-no.

Anne teaches yoga at a birthing center and she took me to one of her classes. At one point I was in a position–cartoonist in knots I think it was called–and Anne asked if I’d ever been in a position like it before. “Mercifully, no,” I said. And I wasn’t 8th months pregnant like most of her students. Peter and Alex spend much of their time playing on Arabian Sea beaches, which may explain why the only thing Alex likes to wear are his water wings.

You can lead quite a luxurious life as an expat in India, but Peter and Anne don’t. Just for our visit they had rented an old Portuguese two bedroom house. They thought the water situation was a vast upgrade from the one they had on my parent’s last Indian visit where they had to haul water from a well they shared with their landlord. This time they only had to haul it from a water tank in the yard that was filled periodically if they remembered to put the garden hose in it at the right hour on the right day. I did develop some leg muscles from squatting in the outhouse.

One of the hardest things about the trip was finding the perfect gift for Katie, my adopted niece who lives down the street. There were all sorts of wonderful handcrafted items that could be bought for next to nothing, but eight-year-olds don’t always appreciate the artistry that goes into making such items. Ironically, I found what I needed from the Plastic’s Walla (he who sells plastic junk): an Indian Barbie. She came complete with a Sari and a bindi (a red dot on her forehead).

Despite the down turn in the economy–or maybe because of it–my business has been holding steady. I guess people feel they need a little laughter these days as I’m averaging over 10,000 hits a day on my web site, thekomic.com. Enough of these folks buy or commission something so I’m able to keep my self well supplied with peanut butter and the local micro-brew.

The saddest day for me this year was the day my 17 year old dog, Heidi (a.k.a. Sweet Pea and Speed Bump), died. It was expected and she died peacefully snuggled between me and my cat, Inky, but I still took it pretty hard. After about a month of feeling sorry for myself, I went to the local shelter and instantly fell in mutual love with Sammy. She’s a big, dopey Omega (as opposed to an Alpha) mutt, part collie, part shepherd, part God-knows-what and all lover and bed hog. She’s also seven-years old. I’m hoping that Obama saying he wants to get a rescued puppy for his girls prompts everyone looking for a dog to look first at their local animal shelter. I’d also urge folks to look at older dogs. Yes, you miss the cuteness of a puppy, but you know exactly what you’re getting so you’re less likely to ever be disappointed. Plus you’ll never have a more loyal friend and no paper training. I’m T- McCracken and I stand by this message.

Cartoons about cows, cattle, beef, ranches, & all things bovine. Cheap. For newsletters, ads, books, blogs, etc. 9 out of 10 cows prefer them to hay.