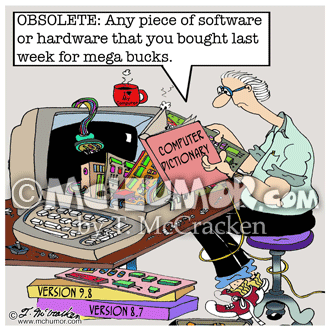 Sometime in the late 1960s or early ‘70s when I was at East Lansing High School we learned how to use a slide ruler and—no joke—went on a field trip to see a computer.

When I was a freshman at the University of Michigan in 1974 I was one of only a handful of students who had a calculator in my introductory physics class. It was a Texas Instrument SR-10, a graduation gift from my parents that could add, subtract, multiply and divide. Such calculating power! And it only cost a little over $100, about a quarter of what U of M then charged instate students per semester. 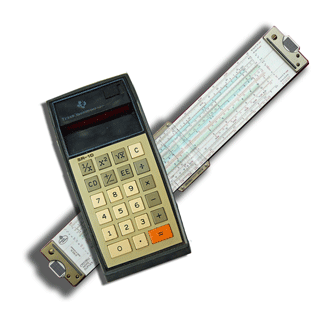 In 1975 I took the computer language Fortran as an elective. When I struggled in class I once quipped, “I should have taken Latin.” I quickly grasped the principles of computer programming, but I was a lousy typist. Computer commands were entered via punch cards, and with a punch card you can’t “control-z”, “undo” or “delete”. Make a typo; throw out the card. I think I spent more on punch cards that semester than I did on textbooks.

Sometime around 1980 I took a class in another computer language, BASIC. No punch cards this time. We used “state of the art” Atari computers and saved data on floppy discs that were actually floppy.

For my final project I created a 20,000-line program I called “Pavarotti.” Enter the notes you wanted sung, and a badly drawn caricature of the opera singer sang them.” I still have the floppy I saved the program on, but I have no way of reading it.

Atari was impressed with my Pavarotti program and hired me teach computer game programming at a free summer camp for low-income kids in Washington D.C. The camp was held in the Children’s Museum. Next to the computer lab was a display of computing stuff through history. It included a slide ruler and punch cards. I was 25, but I suddenly felt old.

In 1986 I bought my first computer, a $2,408.25 Macintosh Plus. It had 128 K of ROM and 1 MB of RAM. Such computing power! I used it mainly for word-processing and maintaining a database of my cartoons using a program called AppleWorks. I think it came free with the Mac.

You could draw on the Mac using a program called MacDraw, but … well, instead of explaining why I didn’t draw on it much, I’ll just show you a couple of cartoons. As they say, a picture is worth a thousand words. 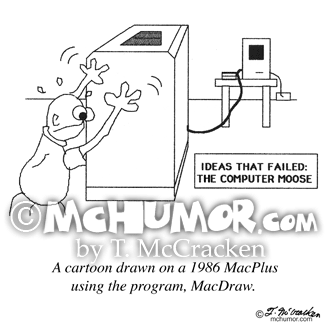 Fortunately I printed these out when I created them, otherwise I’d have no way of retrieving them. I have a file cabinet full of 3 ¼” floppies from those days, and I’m not sure what to do with them. Should I free up space and throw them out? I have no way of reading them. 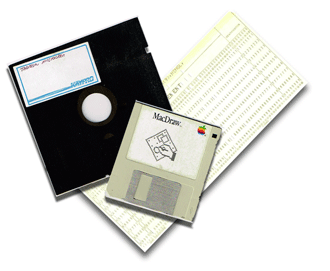 Years later I bought a new Mac, a PowerBook. Appleworks was no longer sold, but I had assumed it would still work on my new machine. Boy was I wrong.

I spent a month retrieving and transferring the 50,000 cartoon records I had to a $50 data program called Bento. I’d always been a big Mac booster, but if you entered my studio during that period you were quite likely to hear me cursing Steve Jobs and Apple.

Six years ago I bought an iMac. Bento worked just fine on it. The Cyber Gods were with me … that day.

Then last month I updated the iMac’s operating system to Yosemite. Bento won’t work with Yosemite! Aghhhh. I had déjà vu because I spent much of the rest of the month transferring my now 100,000-plus data base of cartoon to a $329 Filemaker Pro program.

And it wasn’t just my data program that had problems. Almost every program on my computer came to a crashing halt.

For a nano-second I thought about shelling out $2,000 for a new iMac. The cynic in me said this is why they have so many updates and upgrades: so you have to buy new products. But I hate listening to the cynic in me. Computer “improvements” may improve things for some people, but I’m not one of them. Are you?

This made me think of my Dad and his well traveled typewriter. Here’s a photo my Mom took of him on his first day teaching at Michigan State University in 1965. That’s my then three-year-old brother, Peter, behind him. 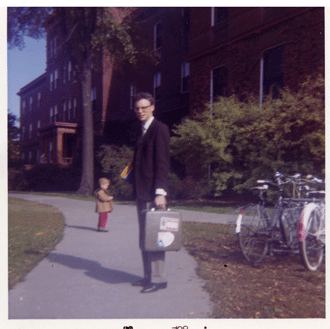 She took this photo on the day he retired in 1999. He had gotten grayer and my brother had gotten taller, but the typewriter still worked as well as ever. 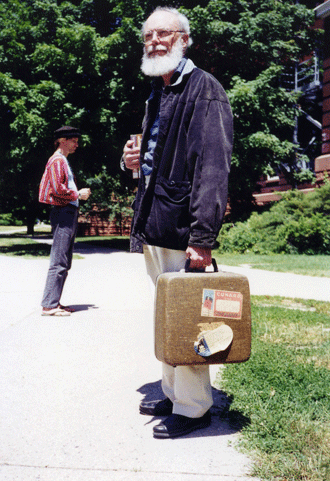 Cheap Computer Cartoons for use in presentations, books, what have you.

One thought on “I Hate Computer Updates”