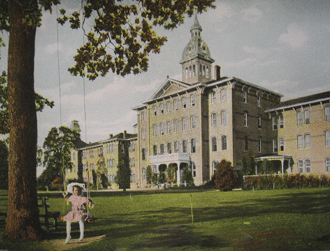 Sometime this winter I will get my fifteen minutes of fame—well, after editing, probably three minutes of fame leaving me 12 minutes for some later date. Last month I got a call from Mark Kachelries, a producer with the Travel Channel’s TV series, Mysteries at the Museum. In each show Don Wildman, putting on his best Indiana Jones persona, tells stories and interspersed through out are historic reenactments and comments from experts. Mark wondered if they could interview me.

I’m an expert on something? I know what you’re thinking. “She’s obviously lost it. Do they still send out men in white to cart people to the insane asylum?”

Mysteries at the Museum will be doing a segment about Edmund Creffield this season and since I wrote about him in Holy Rollers: Murder and Madness in Oregon’s Love Cult, I seemed like a logical person to interview. The logical museum to do the story from was the Oregon State Hospital Museum, better known as the Oregon State Insane Asylum. It was where several of the Holy Rollers were committed in 1904. They filmed the interview yesterday and the whole experience was  surreal. For one thing, Jack Nicholson was lurking behind a window during the whole interview.

I know what you’re thinking. “See. She really has gone mad. It’s good that she drove herself to the asylum and didn’t  wait for the men in white.”

The asylum’s biggest claim to fame is that One Flew Over The Cuckoo’s Nest was filmed there, its most famous lobotomy being a fictional one. My interview took place in front of a display about the movie and behind the camera and sound guys a picture of Nicholson was pasted inside a door’s window .

I know what you’re thinking. “It doesn’t matter. She’s still quite mad.”

Another thing that made the interview surreal was that during it patients were trying to break out of the asylum. The museum occupies a small part of the hospital. It’s still a functioning asylum with about 600 patients, about 80% of them “forensic patients” (criminals “found guilty except for insanity”).

“Sounds like the patients are trying to escape,” I said.

“The administrative offices are up there,” the museum’s director said.

“Oh,” I replied. “So the administrators are trying to escape.”

I know what you’re thinking. “See. She really is quite mad. They didn’t let her just walk out of there after the interview, did they?”

Besides, they couldn’t have held me long even if they had wanted to. I know how to escape from there. I’d have thrown a hydrotherapy machine out the window like Chief did at the end of One Flew Over the Cuckoo’s Nest. I’m buff, don’t you know?

Yeah, you’re right. I am crazy. The show will air sometime this winter. I’ll let you know more when I know more.

Buy an eBook version of Holy Rollers: Murder and Madness in Oregon’s Love Cult at Amazon or iTunes for $3.99, or email me and get and autographed paperback for $16.95.

The Oregon Insane Asylum in 1907