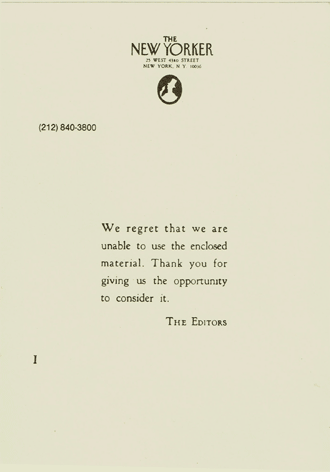 The New Yorker Has Stopped Sending Me Rejection Slips … Sort Of

“Of course I draw for the New Yorker” is the reply I give to the question I’m most often asked as a cartoonist, “but they’ve never bought anything of mine.”

When I started cartooning professionally in 1981 I submitted a batch of cartoons  to the New Yorker every week for a few years. At the time I thought they were great, but now I can see that most were terrible. I stopped submitting to them when I started only drawing commissioned work.

Last month for the first time in decades I drew a batch of ‘toons for my own amusement, bought 200 large envelopes, and hired a monk scribe. Monk scribes are cheaper than ink cartridges because you need only keep them in wine. Any kind of wine will do: even my friend’s unpalatable but potent home brew.

I sent the New Yorker a batch on July 13th, another on the 20th, and, while waiting for my rejection letters, had the monk scribe copy another batch for mailing on the 27th. Then on the 23rd they started accepting cartoons only via Submittable.com and asked that submissions be made no more than once a month. Know anyone who needs 196 large envelopes and a drunk monk?

I wonder if the New Yorker has a stash of unsent non-personalized rejection slips. Having not received one in years I’m not sure if the last rejection slip they sent out had the same format as the dozens I received,  but I bet it did: “We regret that we are unable to use the enclosed material. Thank you for giving us the opportunity to consider it. THE EDITORS” and in the lower left margin was the Roman numeral I.

Brendan Gill who died in 1997 and wrote for the New Yorker for over 60 years received an almost identical rejection slip when he first submitted work: the phone number was different, but it too had a Roman numeral I in the margin. He wrote in his book Here at the New Yorker: “Naturally, I assumed that I was receiving the editors’ Number One Rejection Slip and I flattered and consoled myself with the supposition that less talented would-be contributors were receiving the Number Two and perhaps even the Number Three Rejection Slip. Later, I discovered that everyone who submitted a piece to the magazine followed a similar process of deduction and self-congratulation in respect to that mysterious ‘I.’ In fact, it is on every rejection slip and it is meaningless; nobody in the office remembers now why it happens to be there.”

I can’t wait to see what the computerized rejection looks like. Will it have a mysterious Roman Numeral?

These are some from first two batch of rejects.