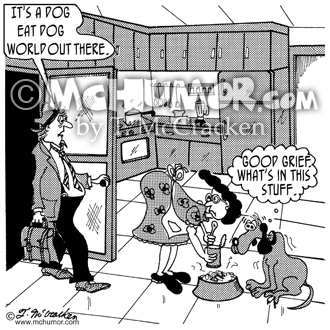 How to Become a Slightly Warped Cartoonist: Part 8

Previously I said I rarely draw cartoons about things from my life. Drawing about my pets is an exception to that rule.

How can you look at a cat with its head in a toilet and not laugh,

or wonder about your status in the world when you’re scooping doggy poop?

And if they don’t qualify for a loan, do they have other options?

The biggest cliché about cats is that they have nine lives. If cats are like average people, they probably have must see TV.

Is there a down side to having nine lives?

And what if the bureaucrat is a bear? Who’s the best-known government bear? Smokey Bear.

And what if the bear is forgetful?

BTW, mchumor.com’s cartoons have been tested on lab animals, and 95% of them died laughing.