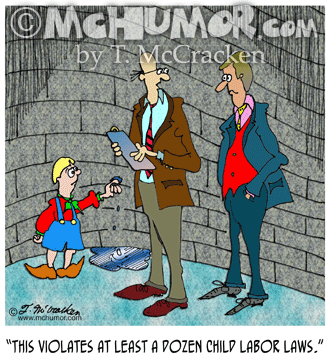 How to Become a Slightly Warped Cartoonist: Part 7

Stick a bureaucrat into almost any fairy tale, and you’ve probably got the makings of a cartoon. The Princess and the Bureaucrat?

And what if the fairy tale character becomes a bureaucrat?

And what if they do get married, but they don’t live happily ever after?

When I do laundry? Not much funny there. When Dracula does laundry? Just the very thought of it is funny. And what sort of problems might he encounter while doing laundry?

Vampires live forever. Is there a downside to immortality? Do they age gracefully?

What happens if movie monsters work nine-to-five jobs? Do they go to boring conferences, too?

What happens if people with nine-to-five jobs meet movie monsters? If they act scared, that wouldn’t be funny. But if they act as though having a monster in the office is normal? Now that’s funny.

In tomorrow’s post I’ll talk about using animals in cartoons.

Cartoons about Kids for use in magazines, newsletters, presentations, etc.