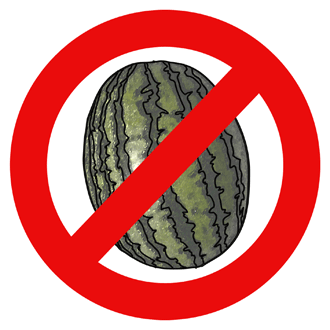 On February 17, 2014, one year ago today, my redesigned website went “live.” The site was an utter failure. If it had been a city, it would have been declared a disaster area. And, frankly, dealing with FEMA would have been a lot less exasperating than dealing with my web designers, Watermelon Web Works.

I surf the web with a computer. My fifteen-year-old niece surfs it via her smart phone. My cell phone is a dumb phone and all I use it for is making phone calls when I’m out and about. My niece needs an app to remind her that she can use her phone to make phone calls. When she calls me at home I answer on a phone that has a cord and a rotary dial—or, as she calls it, a leashed phone.

More and more people surf the web with mobile devices, and since I’m not terribly attuned to a user’s experience on them, I hired Watermelon to make my site more suitable with viewing on these devices. I also wanted them to make it possible for customers to instantly download cartoons after they pay for them instead of waiting for me to email a jpg.

On February 16, the day before the new design was launched, my site had 939 visitors.

The site Watermelon designed was lovely to look at, but it only averaged three visitors a day. Not three thousand. Not three hundred. But three.

For much of the last year I suffered a double whammy: having no income coming in because no one was visiting the redesigned site, and paying Watermelon’s fees. I nearly went bankrupt.

In June I asked Paul Clerc, Watermelon’s top web guru, if there was any chance I could get a partial refund. My old site netted about $1,900 per month. The new site was netting about $10.76 a month. Paul said “No.”

Soon thereafter I balked at paying Watermelon for a fourth time to fix a programming error that was causing my customers to be overcharged. I concluded my email by saying:

If I was only out $8,000 (almost double your bid) it would be one thing, I could walk away from it, but I’ve lost my livelihood, I’ve lost the way I made a living, I’ve lost a business it took me 35 years to build.

When I was looking for a design firm everyone said: “They do good cheap work in India.” I was an idealist, and was willing to pay more to hire not just a U.S. firm, but an Oregon firm. So much for idealism.

Paul emailed: “I do not appreciate the attitude. … These are services that you should be paying several tens of thousands of dollars for. … I understand why you are upset, and I have a good deal of sympathy for your situation, but it is in NO WAY our fault.” The caps are his, not mine.

You can read Paul’s entire email in Part 13 of this review.

He said he was willing to restore my old site for free.

Over the next nineteen days I will blog about my experience with Watermelon. I’ve tried to write the posts in such a way that you won’t need to be a computer geek to get the gist of the story, but there are some technical bits: mostly unedited emails from Watermelon. I’ve included these emails in their entirety so Watermelon can’t claim I’ve taken things out of context.

I doubt that few outside of those who reached this page by Googling “Watermelon Web Works Review” will read my tale of woe all the way through, but that’s OK. I mainly wrote it for those particular Googlers.

Next: In the Beginning

Feel free to share–especially with anyone you know who’s looking for a web designer.
Read Watermelon’s response to this review.

Computer Cartoons for use in newsletters, text books, etc.So cheap you can afford them even if you’ve paid your web designer way too much.