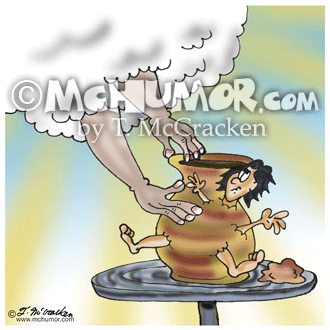 On June 19, 2013, I had a long talk via Google Hangouts with Paul Clerc and Mark Leonas, two of Watermelon Web Works top web gurus. I joked that my mother told me never to hang out with strangers.

I wasn’t rich, but I was comfortable. I could afford an occasional round of golf, dinner out with friends, and the only beers in my house were Oregon microbrews. I’ve always told people they’ll know I’ve hit financial rock bottom if I buy a Budweiser.

Most important, I was content. Everyday I got paid to do what I enjoyed most: drawing cartoons and making people laugh. I hadn’t drawn anything on speculation in over twenty years, something few in my profession can claim.

I derive income from my website in two ways:

1) Editors and publishers find my site and commission cartoons. I charge between $35 and $500 to drawn an original cartoon.

I had two main goals for the redesign:

1) Make it possible for customers to instantly download cartoons after they paid for them instead of waiting for me to email a jpg.

2) Make the site more suitable for viewing on mobile devices.

Mark emailed: “We believe we can make improvements to your site which will likely lead to a significant increase in revenue.” I believed they could.

They estimated the redesign would cost $3,910. People told me I could hire a reliable design company in India for half that. I’m a proud Oregonian, though, and I like the idea of supporting local businesses. Watermelon is based in Portland and Denver.

On June 24 I signed a contract with them.

On June 27 I emailed them that I realized we hadn’t discussed one of my biggest money makers: one-year subscriptions for an unlimited use of cartoons. Could they make it possible for these customers to instantly download cartoons as needed during a year?

Paul emailed, “Adding this functionality will add an additional 6 hours [$510] to the estimate.”

I said fine. Now their total estimate was $4,420. I personally set aside $6,000 for the project in case they went over budget.

On July 11 Mark emailed: “We have completed the first proofs of our proposed design for your new site! I’ve attached them to this message for your review. Please take a look and let me know what you think. From my notes I see that you are likely on your way to Norway now, but hopefully you’ll have access to email so that we can move forward with the design. If we don’t hear back from you sooner, we’ll be sure to check in again in three weeks when you return. Either way, have a fantastic trip.”

I replied: “I’m at PDX, but had a chance to look over the proof and it looks great.”

I was on my way to visit my brother and his family in Norway, one of the most expensive countries in the world. I had money in the bank so felt flush, and soon expected to be flusher.

Computer Cartoons for use in ads, self-published books, etc.So cheap you can afford them even if you’ve paid your web designer way too much.